I previously wrote a post on this which was very popular as I tried to document all of my productivity hacks and shortcuts that I use on a daily basis to assist in writing PowerShell. That post is My VSCode Setup.

I have since moved from a Windows laptop to MacOS so I wanted to make a note of customisations and changes so I had a place to track all of them but other people may also find some of them handy.

Some stuff won’t have changed too much because, well…..there was no need but my way of working has shifted slightly and I spend more time with a split terminal between bash and PowerShell.

I thought the switch to MacOS was going to be more difficult than it initially was but once I sorted my muscle memory out (mainly for copy and paste) it was a pretty seamless transition. The multiple desktops and the trackpad/gestures is an awesome experience.

Unfortunately I do have to keep an Azure VM handy for the very odd ocassion that I may need something Windows specific.

Switching from Windows where I used Chocolatey for my software installation needs, I had heard about homebrew and was keen to make a start with using a decent package manager from the start.

You can install homebrew from the command line too!

Now that you have Homebrew installed you can go about installing the rest of your applications.

So rather than use the standard built in terminal that comes pre-installed with MacOS I have opted to use iterm2 (mainly because I heard other people say that it was awesome and no other reason) and I love it.

It supports pretty much anything you can throw at it in terms of fonts, customisations and themes.

Setting zsh as the default shell

I seen a gist from @markwragg which I bookmarked with the anticipation that I may one day switch to MacOS then unknowingly I made that switch my self. He documented some of the changes that he made when he switched to MacOS. That gist is here and has some handy stuff within.

I chose not to make as many changes as Mark but the ones I blatantly stole are:

I have my notification bar and dock hidden on my mac for maximum screen real estate so this helps when quickly trying to access the dock.

Case insensitive auto-complete is a total life saver coming from the windows world and I don’t know how many hours I have lost on linux machines debugging my own stupidity.

Pressing ESC to clear the whole line in the terminal which is familiar behaviour for me and one of the muscle memory options that I want to keep. The rest of my keyboard shortcuts are listed below (that I can remember adding).

There are probably more but these are the ones I can remember adding.

Oh My Zsh is a delightful, open source, community-driven framework for managing your Zsh configuration. It comes bundled with thousands of helpful functions, helpers, plugins & themes.

This has changed slightly as I am now on MacOS in the fact that I am now running two different profiles for bash/zsh and one for PowerShell.

I am using PowerLevel9k for my theme which offers some nice customisations. I have not really played around with this beyond my initial setup which I am quite happy with.

I am now finding that I am using zsh as a primary shell over PowerShell for day to day interaction especially when interacting with git. I also tend to stick to bash for Azure CLI too for the tab completion and speed it offers. 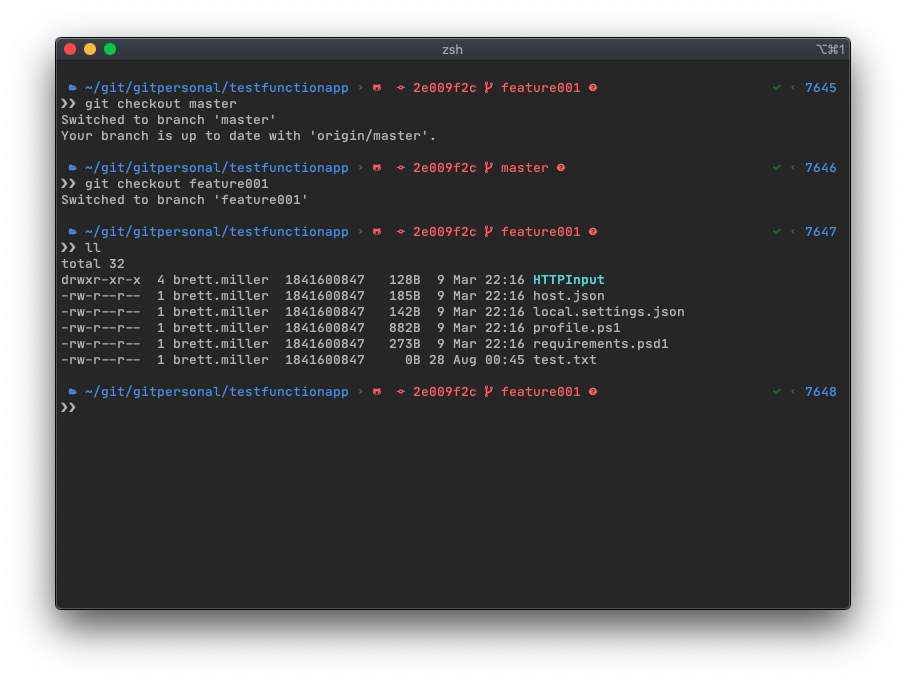 I have added this as a gist.

There are a few things that I have had to add to make my life easier when switching between bash/zsh and PowerShell so that I have consistent commands available to me.

cls is too engrained and quicker to type so that has to go in there. The other two aliases are pretty self-explanatory.

The other thing that I really like is the tab completion for Azure CLI which doesn’t appear to work with zsh out of the box. Adding this to your zshrc profile enables that.

Update After a thread on twitter by Dave Carroll I decided to take a little time and fix up my pwsh profile to something a bit nicer.

This has changed a little since I moved. Mainly to accommodate differences between bash and PowerShell on Mac so that they work in a consistent manner.

My Toolbox module that I import in my profile can be found here in my github repo. This has the following functions which are imported into my session.

I like being able to traverse the directory structures quickly so these shortcuts allow me to jump back one or two directories quickly and are also available in zsh so it’s consistent behaviour across shells.

zsh has some handy default parameters for ls so I have added these to my PowerShell prompt as I am too used to ls to stop using it so may as well make it consistent right?!

Alias all of the things

PSReadline is awesome and it’s made even more awesome on MacOS with the PSUnixUtilCompleters PowerShell module by @rjmholt which gives you parameter completers for native linux and MacOS comands.

Enable this in your profile with the below:

After seeing Tyler Leonhardt (@TylerLeonhardt) example in the twitter thread I decided to give Posh-Git a go with Oh-My-Posh and I am very pleased with the result.

One other cool thing that I added to my profile recently was enabling the ability to traverse folders without having to use Set-Location or cd which is consistent behaviour with zsh.

I found an old blog post on devblogs where Jason Shirk(@lzybkr) had written how to do this so I modified it slightly for my needs so that any command you type is evaluated and if it’s a path it will traverse into that directory. This is yet more consistency between the two shells and saves on the typing. Coupled with the .. & ... aliases it makes navigation so pleasant.

I have updated the gist of my profile here. 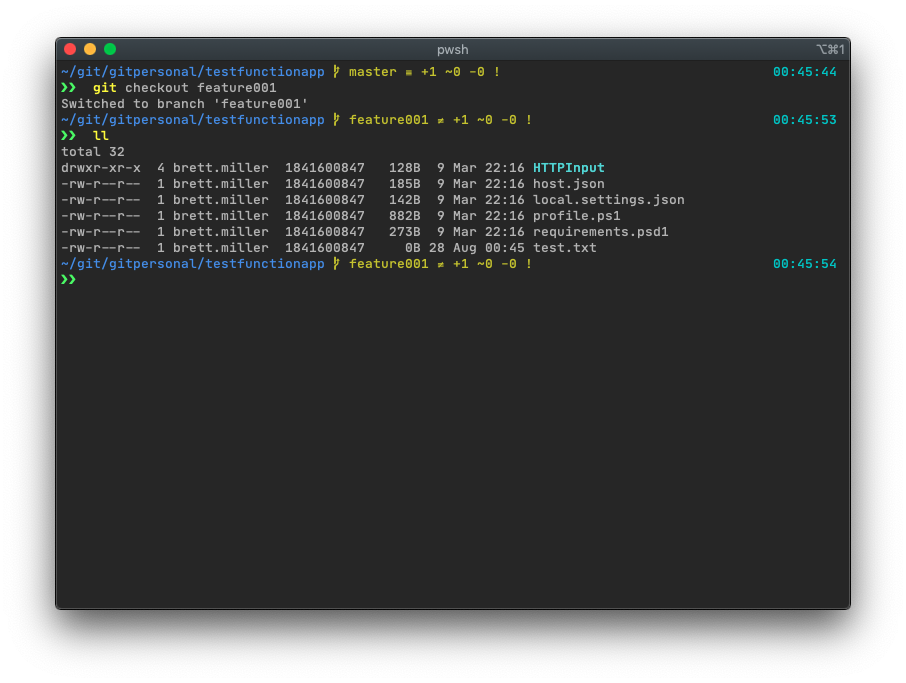 I wrote about Developing Pwsh Azure Functions inside a Container some time ago and it was really my my first foray into using docker as a daily tool but this is now how I work every day for most of the repositories and code that I write.

The above post covers pretty much everything you need to get started with that but using docker as a development enviroment has been a game changer.

I use Azure functions a lot, both PowerShell and C# and being able to develop these in a container without having to have the Az Functions Core tools or npm or any of the extensions installed locally is a dream. You need to check it out if you haven’t already.

So I have written already about how I use AzureCLI & PowerShell together but I was also made aware of jq which I suppose is similar to how I would normally use ConvertFrom-Json or ConvertFrom-Json.

I have been trying to get better with this instead of just defaulting to PowerShell but the data manipulation and objects that Pwsh provides it’s a tough ask.

My original post is still very much valid and most of the shortcuts I have copied over and work just fine.

Some of the items are now available by default in VSCode or in the PowerShell Extension but some of them I will never be able to live without.