Naturally I opted to be a total nerd about it and use PowerShell to randomly generate who would be gifting presents.

I started out knowing the list of people taking part, even if they didn’t know they were participating at the time and I would just randomly assign them someone to buy a present for……simple right?! 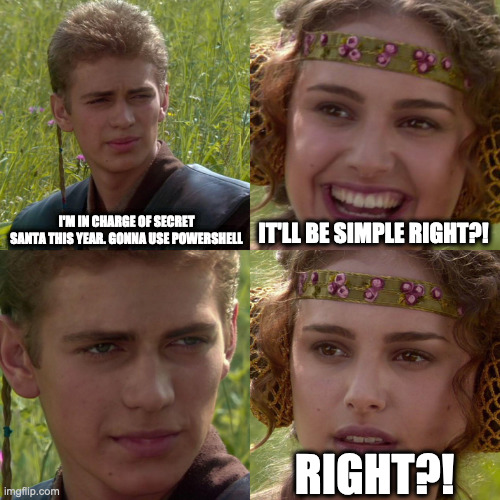 The downside to this is that every now and then there was an issue with the last person in the loop would sometimes not have anyone to buy for. I wonder if I could fix it so that I was last in the list 🤔

This wasn’t as easy as my ‘Quick PowerShell script’ idea initially planned so naturally I did what any engineer would do!

The first result was from Mike F. Robbins (@mikefrobbins) naturally and it looked perfect for what I was trying to do.

Interestingly he encountered the same issue I did with the basic loop sometimes leaving a santa without someone to gift a present to. I decided to steal Mike’s code to make my life easier.

This works great but with only one problem! I am in the secret santa so I don’t want to know who other people are buying for, including me! So i will have to change it up a little.

The main changes are in the latter part of the function which generates the output. I don’t want to print to the screen and spoil the surprise so I decided I would write the results to a file so that I could send the file to people without opening it and revealing who the recipients of the gift were.

This was the quickest way I could think of that would generate a secret santa for everyone without me, the organiser, knowing who was gifting presents to whom. I then sent the individual files to each participant so that only they knew who they were gifting a present to.